THIS IS the droid you are looking for!

After having more problems than I could count with my old phone, an HTC Thunderbolt, I finally upgraded, and what an upgrade it turned out to be!

My new phone is Motorola's Droid Razr Maxx HD. With a 3300 mAh battery, it easily lasts two days under light load, and the fastest I've managed to discharge it is 14 hours of Netflix, Google Maps navigation, Ingress, and Dropboxing all my photos to my computer, and even after all that, I was still at 25% battery remaining. Here are a couple screen-caps of my battery tracking program: 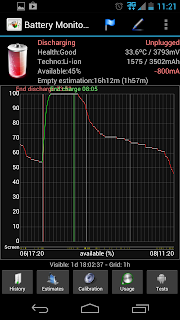 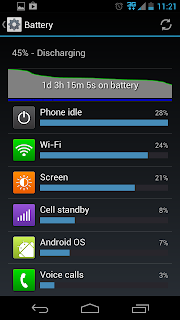 The phone feels incredibly sturdy in my hand, probably due to the Kevlar, Aluminum, and Gorilla glass that make up the outer surfaces of the phone. On top of that, it's a RAZR, and comes with the signature thin design, keeping the whole phone a mere 9.3mm thick. Inside and out it's coated with a hydrophobic nanopolymer, meaning that the phone is effectively splash and rain proof.

Out of the box, the phone runs ICS with Motoblur, but it immediately downloads the Jelly Bean update, increasing battery life and performance, and adding Google Now. When I first heard about Google's new predictive notification tool, I brushed it off thinking it'd be lame and mostly useless, then I tried it. Google Now is awesome. As a response to SIRI it's brilliant, why type or ask when your next meeting is? Your phone knows already, so Google Now predicts the need for you to know, and adds it to the list of "cards" in the Google now app (accessible by a swipe up from the home button). It'll also show a weather card when the weather turns, and the traffic between where you currently are and your home when you get off work. 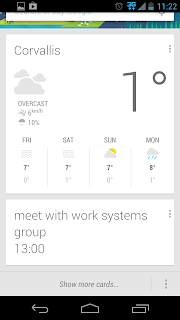 My biggest beef with my old phone (the Thunderbolt) was that the 4G service was crap. I can now confirm that it's not Verizon's network that's crap, it's the Thunderbolt's 4G receiver  My new phone gets great 4G reception just about everywhere, and seamlessly switches on and off of wifi networks and 3G when needed.

When I first turned on the phone, I immediately noticed the clarity and contrast of the display (a 720*1280 AMOLED HD display.) Even in bright sun, the display is clearly visible, and text and images pop with color. Blacks match the black of the bezel, and colors shine bright (and the default wallpapers show it off oh so well) 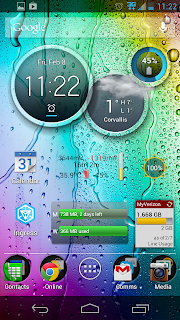 Many of the online reviews complain about the camera quality, but I attribute that more to unrealistic expectations than a bad camera. the photo and video quality is way better than my Thunderbolt, and it works surprisingly well in low light.

The phone has 32gb of internal storage, along with an SD slot if extra space is needed, and the whole thing's backed by a 1.5 GHz dual core processor. Although that is a smaller proc than some other smartphones out there, I challenge them to pull off two days of battery life under normal use.

Overall, I'm extremely happy with this phone, and will post updates if any issues or new features come up!

Email ThisBlogThis!Share to TwitterShare to FacebookShare to Pinterest
Labels: Project:Review