It's getting close to the new year and I'm realizing that I haven't posted nearly as much as I feel I should have. In this post, I'll try to give an update on everything I've been up to lately (hint, mostly schoolwork).

I'm back at school again, (or was, till Xmas break) and am living in an awesome appartment with some friends, and in order to house my tools, I built a really cool workbench! 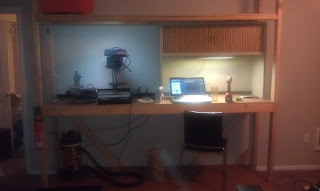 I've been printing tons of parts on the Makerbot, and designing some cool new stuff, along with working for the OSU Physics Department, where I maintain lab equipment and operate a Makerbot TOM.

In terms of coursework, This term has got to have been one of the hardest I've had. 17 credits of engineering courses is quite the challenge, but I passed all my classes, and learned a ton!

My favorite class was ME382, Introduction to design. In the class we designed and built remotely operated vehicles to compete in the ASME design competition. My team built this: 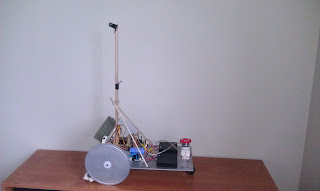 It uses a Boarduino for brains, and XBee wireless communication, with an Adafruit PWM breakout board and breadboard power supply. 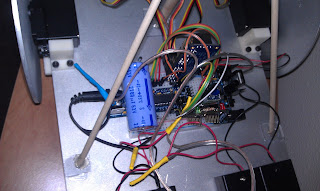 The drive motors are continuous rotation servos, and there are three servos that operate a manipulator on the front of the machine.

I've also been doing a bunch of work with the OSU Solar Vehicle Team, we've been working a bunch on the car, and recently did test-laminations of the new solar cells we're planning to use! 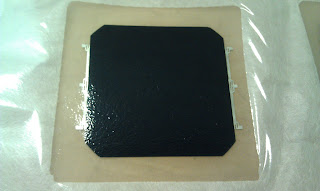 At over 20% efficient, they blow our old cells out of the sky! With the new array that we're building, we expect to be able to squeeze out 5-8 more miles an hour on our top sustainable speed!

In november of this year, Google released their new Augmented Reality game, INGRESS. It is hands-down the coolest game I've ever played. By forcing players to get outside and move around to play, it completely changes how the game is played, along with forcing players to cooperate and strategize. It's currently still in private beta, but you can usually get an invite by making some cool artwork/tech work, like I did:

This post is a bit of a ramble, but wanted to share quickly before I could procrastinate on it any more!
Posted by Unknown at 9:28 PM