Inspired by CharlesPax's spool holder design, but lacking the room to bolt the spool to the side of the bot, I set out to design my own spool holder! Designs and STL's can be found at http://www.thingiverse.com/thing:8421, and more pictures after the break! 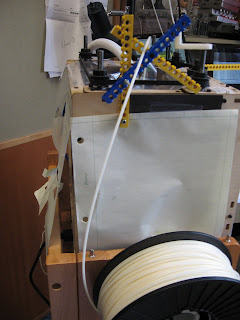 I started by looking at Pax's design, then set out to design my own. I chose to have three petals instead of two. I also chose to use a 6-bolt pattern instead of the standard makerbot 4, but I think that's probably overkill :-)

The second part is  a clip that attaches to a shelf, so that the spool can be hung from the side. I've been printing from it for a little while now, and it's amazing not to have to worry about filament feeding anymore!!