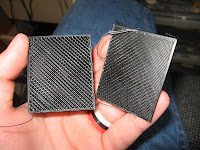 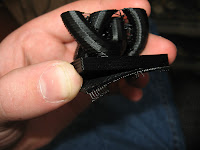 Recently I've been having some curious problems with my Makerbot. When I print parts with large flat bases, the first two layers (solid) completely delaminate from the rest of the part. (it makes more sense in the pictures) Not sure why it's happening, and I've tried several ideas (raising print temp, lowering print temp, putting the MakerBot in a warmer room...) to get it to stick better, to no avail. Current configuration + settings: Acrylic platform + settings posted earlier on this blog

Any ideas as to why this might be happening?

With all that space (see previous post), and access to the world's largest repository of collective knowledge (the internet) Students of today have unprecedented access to different kinds of information. Where in the past, a student wanting to get information on a topic would have had to walk to the library, look through a catalog, search through the shelves and check out a book that may or may not have the information that they're looking for. The web is different. With just a few clicks, a student can search the sum total of all knowledge on earth for what they want, easily skim through huge amounts of data, and find exactly what they were looking for.>
Posted by Unknown at 9:26 PM 1 comment:

When it comes to computers, one of the biggest reasons to have one is storage. For the price of one textbook (approx $200, from personal experience, yeah, textbooks are expensive), you can buy a 2 TeraByte (2 trillion byte) hard drive (http://ns1758.ca/winch/winchest.html). On that hard drive, You can store 7.813*10^9 (7813000000) pages of text (that's close to 1/10 the size of the ENTIRE library of congress)  (http://www.wolframalpha.com/input/?i=2+terabyte). The average computer nowadays has around 100-200 GB of space (100-200 billion bytes) (from various advertisements and sales websites of major computer companies), which is enough to store 7.8*10^8 pages of information. (http://www.wolframalpha.com/input/?i=200GB+to+pages) With that kind of storage space, it’s possible to store every assignment you’ll ever need to turn in, plus music, movies, pictures and more.
Posted by Unknown at 9:21 PM No comments:

One of the greatest tools I have ever used in school is my laptop. Hands down. The ability to keep all my schoolwork, all my music, all my entertainment in one portable place is invaluable to me.


Opponents of laptop use in schools always say that laptops are more of a distraction than a tool. And while I'd like to say that that's a total falsehood, sadly, it's not. I'm the first to admit the use of Facebook, Twitter, and other social networking tools to get through a boring lecture. However, I still take copious notes, and audio recordings of lectures, enough so to submit them to the school note-taking service and get paid. However, the problem arises when students pay no attention, and only play online for the entire lecture. Upon seeing this, Teachers react in different ways, some simply ignoring it, while others impose strict rulings. One professor at the University of Missouri "bans laptops in her large lecture courses", and says this has led to "Huge increases in attention and better performance on exams" (Bugeja, Michael. "The Age of Distraction") While I'm sure that a strict ban like that may benefit some students, It would not surprise me at all if other students suffered. I know I would.
I see bans like that as a real limit on a student's independence. Especially in college. Students are paying for the courses, and the professor's not required to guarantee them success. I regularly attend class to see a room only half filled, even though the 200+ person roster is full with waitlist. What's the difference between attending class and not paying attention, and just not attending at all? I guess my point is that If students don't care about a course, They won't do well. While it may be beneficial to some students to have a ban on laptops, I believe it can be detrimental to others. My belief is that in a college atmosphere, it should be solely up to the students to manage their distractions. If they can't handle the distractions, then it's their problem, not the schools. As my chemistry professor Dr. Richard Nafshun commented to a half empty lecture hall, "There's one customer that you can always count on to be happy about being ripped off: A student." I think that this, while it really shouldn’t be true, exemplifies the problem. Students of today are so immersed in their own wants that they no longer pay enough attention to their education.
Posted by Unknown at 11:11 AM 1 comment:

The next few posts here on my blog will be focused away from my MakerBot, and towards my education.

Specifically, towards the dilemma of using, or not using various technologies in education. Personally, I use many different technologies doing schoolwork on a daily basis, and I think that all students, no matter what their opinions on technology, can benefit from the use of technology in education. Each post in this series (all posts will have the label TIE) will focus on the use, and misuse of one particular piece of technology in an educational setting. I'll try to cover the bases, touching on everything from laptop computers to cell phones and power point, but I don't have all year to write, so I may have to leave some things out.
Posted by Unknown at 11:00 AM No comments: